As Aussiespeed has developed our range of manifolds we have taken on board feedback from enthusiasts as to what they want as far as products and performance gear for slant six engines. While working with an engine builder on a blow through super charger project hood clearance became a problem. Having a slant 6 that had a blow through supercharger and also a port type fogger nitrous kit fitted only problem was the AS0299 with its extended plenum left no room for the blow through hat that was mated up to the side mount supercharger. The AS0470 with its ultra low mount may require carburetor linkages to be modified has a multi drilled north/south and east/west bolt patten for a squarebore carb, the  manifold has a runner length including the plenum from the cylinder head flange to the widest point of the manifold of 30cm.

Aussiespeed short runner AS0470 intake manifold fitted to a race car in the USA, Its great to see our products being used by racers overseas

A fully plumed nitrous oxide injected 225 Slant six Chrysler engine using an AS0470 intake manifold, the bottle fed slant uses both direct port and a plate system.The manifold has one x 3/8 npt vacuum take off on the rear of the manifold for brake vacuum and auto transmission fitting. 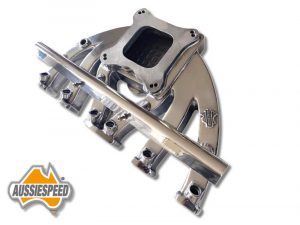