Aussiespeed manufacture an extensive range of sand cast aluminum valve covers, The majority of our valve covers are taller and wider than pressed tin valve covers. Many years ago we realised that many valve covers did not have a way or had a crude way of controlling the way the PCV and oil filler underside was protected from direct contact from engine oil. Regardless of how the oil is controlled many people over look or dont under stand the way crank case pressure needs to be looked at and under stood. 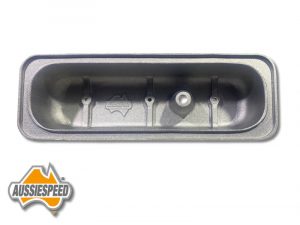 The funnel style breather cast into Aussiespeed valve covers should not be cut out completely. If you need to trim or grind it to suit your valve spring/rocker combination you will have to still make sure that adequate deflection is placed around the oil filler and pcv fitting. 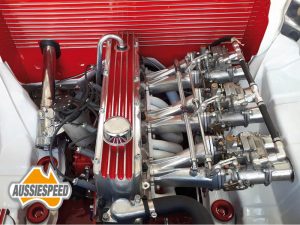 This is not a technical article copied or professionally written it some things that during over 30 years of talking to customers, engine builders and trying to help people sort out oil leaks and breathing problems. Some may disagree with what is written here but at the end of the day if we can help more than 1 person its worth it.

If you look back to engines from the 1940s, 1950s, 1970s and 1970s many had what was referred to as a walking stick breather that in many cases exited the side plate or valve cover and also had an open style breather type oil filler cap. As engines become worn, rings lost a bit of tension they would start to breath a bit and oil would build up over time and a few drips would end up on the ground. As people started to hot rod engines and fitting high volume oil pumps, increasing the oil capacity, revving engines harder oil controlled was not always addressed. 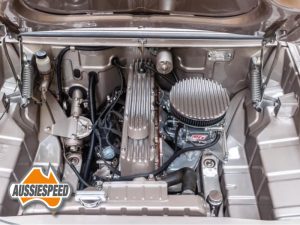 We recently had a customer contact us with a Holden V8 355 stroker fitted with our AS0056 timing cover. The customer found that the oil seal for the harmonic balancer was leaking. He had fitted multiple seals and was ready to replace the harmonic balancer thinking that the tolerance was wrong or something might be wrong with the timing cover . Working with customers to solve problems kinda comes with the job. After asking a few questions about how things were set up we worked out the engine had standard tin style factory Holden v8 rocker covers, with a PCV valve fitted to the passenger side rocker cover and the flat style NON VENTED push and turn flat style oil filler cap. On  Holden V8 engines with the introduction of emissions the breather systems were changed and a breather hose went from the valve cover to the air filter. While speaking to the customer the engine had done around 400KM and had been fully rebuilt. An interesting thing the customer said was when he first had the engine running it kept blowing the rocker cover to air filter hose off. His answer was to block the hose and clamp it so it couldnt blow off. 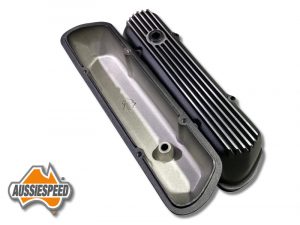 What this has done is turned the engine into a pressure vessel. As everything else was sealed up and the build up in crank case pressure was pushing oil out of the timing cover seal. We told the customer to take the flat oil filler cap off, clean up around the timing cover seal and take it for a spin. With the blank non breathing cap removed no more oil leaks from the seal.

Another item that you may not understand is a pressed tin valve cover is around 1mm thick, when a valve cover is redesigned and made in aluminum the normal wall thickness is increased to around 5 to 6mm. If the material is added to the inside of the cover it can cause problems when larger diameter valve springs and components are used. The extra material is added to the outside wall of the valve cover, when this happens alot of original style flange type bolts can not be used. Aussiespeed have a range of socket head cap screws listed in our online store to suit our valve covers. These require less clearance and can be installed with a allen key and spring washers. 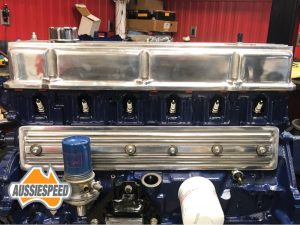 We hope that the information above will help you understand that there is a difference between standard and after market components and why you need to make sure you vent your engine and why a stock fastener might not fit. 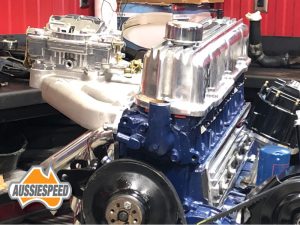