Aussiespeed Holden 6 cylinder red motor 4 barrel manifold suit Holley squarebore carburetor from 390 CFM upwards in the standard north south mounting position. The Aussiespeed AS0002 manifold is designed to be used on modified engines and can be used with LPG as well as on petrol engines and has been used on many Holden 186 and 202 engines as a blow through manifold with a turbo charger. The AS0002 red motor Holden manifold has a cast in plenum filler on the port floor, fuel drop out grid and a divided centre plenum divider. the manifold is 225mm wide at the widest point measured from the cylinder head face to the widest part of the plenum. 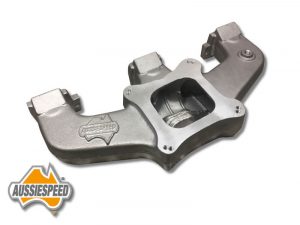 The picture show the plenum design and plenum pig that is part of the manifold, this manifold has been used on mild and hot street engines, with nitrous oxide and with blow through turbo set ups. 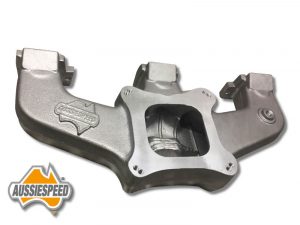 Due to the runner size and large plenum we decided to cast the plenum pig as part of the manifold, we have yet to see a Holden 6 perform better without it.Manifold width from the head to the widest part of the carb pad is 225mm

The manifold has one x 1/4 npt vacuum take off on the rear of the manifold for brake vacuum and auto transmission fitting.

A few months back we showed a little Holden Grey motor on the dyno at Powerhouse Engines which made 129.6hp. Well here's big brother with 206ci (179+202crank+overbore) making over double the power with about the same build cost. Old Grey motors are cool, but horsepower is even cooler.