When retro fitting a  4.0 OHC from a Ford Falcon 6 cylinder engine to another model or early model Falcon the air conditioning compressor can be a problem to still run the standard 6 rib belt to run the altenator and harmonic balancer. the problem arises of what to do to get enough belt wrap so the rest of the pulleys and factory belt tensioner can still be used. The AS0239EF/EL  is made in Australia and is sand cast from premium aluminum unlike cheap imported die cast products. The eliminator bracket by Aussiespeed does just that as most model falcons were all fitted with air conditioning the arm bolts to the 3 lower bolt holes on the block on the passenger side of the engine. Used on many speedway cars we also make a bracket for the earlier series engines part number AS0239EA/EB. You are buying a kit that includes a 6 rib plastic pulley, bearing, bearing bolt, engine block bolts and spacer. 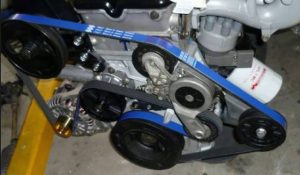 WE ARE BACK FOR 2021, IF YOU HAVE ANY PROBLEMS PURCHASING FROM OUR ONLINE STORE PLEASE CONTACT US. Dismiss